What is Qatar well known for? What makes Qatar famous? 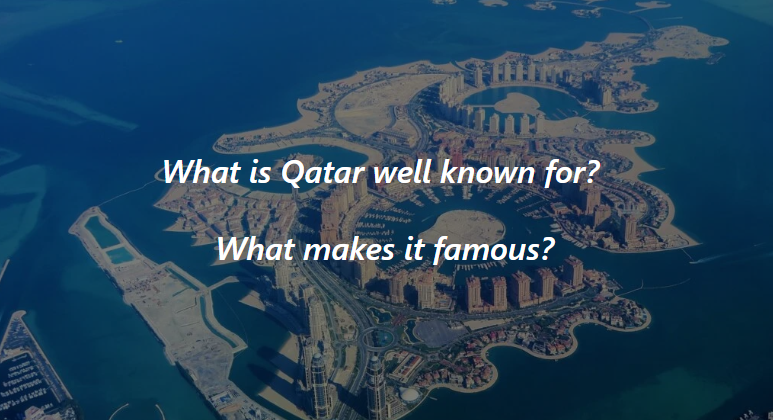 Qatar is a small country located in the Middle East. Despite its size, Qatar has made a big impact on the world stage in recent years. This is largely due to its hosting of the FIFA World Cup in 2022, making it first Arab country to do so. What else Qatar is well known for, lets find out in this article.

Qatar is a small peninsula located in the Gulf region. The country is bordered by Saudi Arabia to the south and west. It has a population of 2.6 million people, making it one of the most densely populated countries in the world. The capital city is Doha, which is also the largest city in Qatar.

Qatar is a small country with a big impact on the global oil and gas markets. It has the world’s third-largest natural gas reserves and is the leading exporter of liquefied natural gas. Qatar’s oil reserves are the seventh-largest in the world, although it produces far less crude oil than its gas. The government has a majority stake in Qatar Energy (Qatar Petroleum), the national oil and gas company. Qatar Petroleum is responsible for all aspects of the country’s oil and gas industry, from exploration and production to refining and marketing.

Qatar is a high income economy, with a GDP per capita of $130,700 in 2020. It is the world’s richest country per capita. Qatar has been investing heavily in its infrastructure and diversifying its economy, and is now one of the fastest growing economies in the world.

The airline offers a five-star experience, with luxurious seats, gourmet food, and excellent service. Plus, Qatar Airways flies to some of the most amazing destinations on earth. If you are looking for a truly special travel experience, Qatar Airways is the best airline for you.

Qatar Airways flies to over 150 destinations worldwide. They have a fleet of over 200 aircraft, and they are continuing to grow. In 2017, they launched their new A350-1000 aircraft. This is the latest version of the A350, and it is one of the most technologically advanced aircraft in the world.

Al Jazeera media network is a Qatar-based news and current affairs channel that covers a wide range of topics. The network has a global reach, with its flagship channel Al Jazeera Arabic available in over 140 countries. In addition to its Arabic channels, Al Jazeera also operates channels in English, Turkish, and Swahili. The network’s website also provides live streaming of its channels and on-demand content.

Al Jazeera has a large audience, but the organization (particularly its original Arabic channel) has been criticized for its alleged involvement in controversies ranging from and slanted journalism to anti-Hindu bias and anti-Israel bias.

These controversies led to a diplomatic incident that began on 5 June 2017 when Saudi Arabia, the UAE, Bahrain and Egypt severed diplomatic relations with Qatar and banned Qatar-registered planes and ships from utilising their airspace and sea routes, along with Saudi Arabia blocking Qatar’s only land crossing.

The Qatar Investment Authority (QIA) is the sovereign wealth fund of the State of Qatar. The QIA was founded in 2005 by then-Emir Hamad bin Khalifa Al Thani to manage the oil and natural gas surpluses of the country, as an investment vehicle for the long-term benefit of the state. The QIA is a member of the International Forum of Sovereign Wealth Funds and is headquartered in Doha, Qatar.

As of June 2018, the QIA had $335 billion in assets, making it the world’s sixth largest sovereign wealth fund. The QIA invests in a variety of asset classes including real estate, private equity, public equities, fixed income, and hedge funds. The QIA is also an active investor in Qatar’s domestic economy and has stakes in several major companies including Qatar Airways, Qatar National Bank, and Vodafone Qatar.

The Hamad International Airport has been ranked first among airports in the Middle East and North Africa by Skytrax, a leading international airport rating agency, based on passenger satisfaction. Skytrax also rated Hamad Airport as the best in the world in 2019.

Hamad International Airport has also been rated as one of the best airports in the world by Airports Council International (ACI), based on passenger traffic.

Hamad airport is located in Doha and serves as a hub for Qatar Airways. It features two terminal buildings, a five-star hotel, an aviation academy, and a state-of-the-art control tower. The airport has a capacity of handling 30 million passengers per year.

The Airport is a transit for millions of passengers every year and is one of the busiest airports in the world. It is also the main gateway to Qatar and serves as a hub for Qatar Airways, which is the national carrier of Qatar

Qatar is one of the world’s leading producers of natural pearls. Qatar’s natural pearls are world-renowned for their lustrous beauty and perfect shape. Qatar’s pearl industry is an important part of the country’s economy, and the country is committed to sustainably managing its pearl resources.

In 2018, Qatar made a major discovery when it found a large deposit of natural pearls in the waters off its coast. The find was announced by Qatar’s Minister of Energy and Industry, who said that the pearls were of “exceptional quality.”

Khor Al Adaid, also know as Inland Sea is one of the most fascinating attractions in Qatar. It is a place having sea at one end and desert at the other end. There are huge stretch of sand dunes that are surrounded by the sea. You can reach Khor Al Adaid from Doha by taking a bus or renting a car (4×4). The best time to visit Khor Al Adaid is between October and March. The weather is cooler during this time and the sands are not too hot. UNESCO listed it as a natural reserve of Qatar.

So these are the main reasons of Qatar being famous in the world. If you are looking for some amazing facts about Qatar which probably you did not know, then check out the below link: