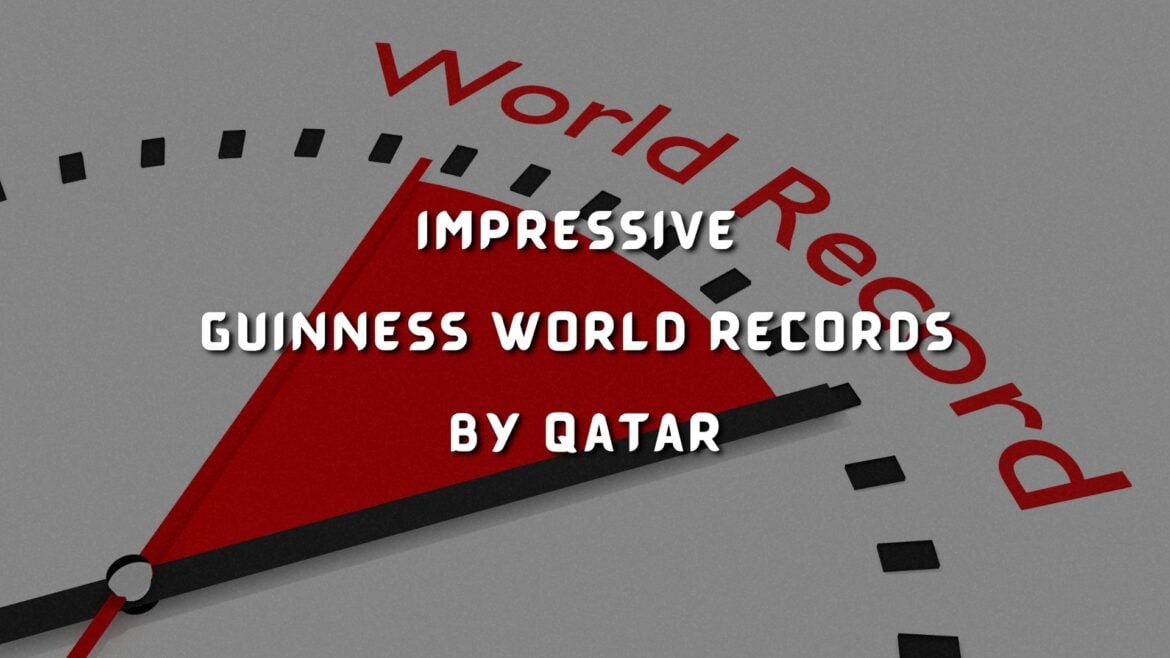 From mega-projects to successful coffee shops, Qatar has the power to attract and amaze everyone. The country is known for upkeeping its cultural and tradition while working at par with international standards. No wonder they are able to achieve some of the most challenging feats in this world.

Qatar has set and broken a number of Guinness world records. We have gathered for you, some of the most fascinating ones to explore:

The country with the lowest taxes

There are two sovereign countries with the lowest personal income tax rates: Bahrain and Qatar. In both countries, the tax rate is Nil, no matter how much income one earns. This record is measured by the vertical distance which the gondola can travel during the ride, it can carry 12 people and reach speeds up to 55.56 km/h (35 mph). Premier Rides (USA) is the manufacturer of Quest, which is located inside the Doha Oasis project in Musheireb. The 27,500 sq m entertainment centre has more than 30 rides and attractions, including the tallest indoor roller coaster – the EpiQ Coaster – and the tallest indoor drop – the Magma Blast.

The fastest 300 km by speed boat is 1 hour 55 minutes and 14 seconds and was achieved by Sheikh Hassan bin Jabor al-Thani and Abdullah al-Sulaiti (both Qatar) on 10 February 2010. The route was from Abu Dhabi to Doha, Qatar. The boat used was a twin gas turbine engine Nor-Tech speed boat named Qatar Challenger. The engines on the boat are also used on Cobra helicopters.

Sports City Advertising attempted this record to showcase the Torch Building that has the screen all around it. The Torch, an architectural masterpiece, also known as the Aspire Tower, has a total height of 298 m (980 ft), located in Doha.

The path is 7 metres wide, features 29 tunnels and 5 bridges and is designed to allow speeds up to 50 km per hour.

Crossing of Qatar by wheelchair

The fastest crossing of Qatar by wheelchair is 1 day 17 hours and 55 minutes and was achieved by Ahmed Al-Shahrani (Qatar), in Abu Samra, Qatar, on 3 April 2021.

Ahmed Al-Shahrani achieved this record title to honor and encourage the inclusion and participation of people with disability in sports.

The tank was built using innovative engineering and construction techniques. It is a great achievement for Qatar and has set a new world record.

The tallest freestanding 3D printed concrete tower is 12.1 metres, achieved by Doha Expo 2023 & Ministry of Municipality Qatar (both Qatar) for Qatar pavilion, at Floriade Expo 2022 Almere, Netherlands, on 12 May 2022.

One Hundred and Fourteen nationalities attended a yoga lesson to set a record. This was achieved by Indian Sports Centre under the aegis of Embassy of India (Qatar), in Doha, Qatar, on 25 March 2022. The yoga lesson was taken by Nisha Agrawal for 40 minutes with all participant simultaneously following the different yoga postures as instructed

The most nationalities of people planting trees simultaneously is 66 and was achieved by The Supervisory Committee of Beautification of Roads & Public Places, in Doha, Qatar on 9 October 2021.

Most of 66 nationalities present were diplomats and completed the planting process simultaneously.

The South Pars/North Field gas field, discovered in 1971, covers an underground area of 9,700 km2, straddling the Iran-Qatar border. Its total reserves of natural gas are estimated to be around 51 trillion cubic metres, along with the equivalent of 360 billion barrels of oil.

The deepest artificial port basin created on land was achieved by Ministry of Transport and Communications (MOTC) at Um Al Houl, Qatar on 9 September 2019.

The project started in 2011 and at the height of development used a 16,000 people workforce. Over 6,900 tons of explosives were used for excavation.

The board weighs 1052 kg and was built to celebrate International Children’s Day 2019, where thousands of children can participate in the event.

Qatar’s flag is the only national flag having a width more than twice its height, based on its official height-to-width ratio of 11:28. The maroon flag with a broad white nine-pointed serrated stripe on the hoist side was adopted on 9 July 1971, just before Qatar gained independence from Britain on 3 September 1971.Advertisements

The most common aspect ratios in official flags are 2:3 and 1:2.

The youngest person to publish a book series (female) is Laiba Abdul Basit (India), who was 10 years and 164 days old when her second book published on 29 August 2021.

Laiba published a 3-book series called ‘Order of the Galaxy’.

The largest classified advertising newspaper measures 4.2 m (13 ft 9 in) in length and 3.2 m (10 ft 5 in) in width and was achieved by The Weekly in Doha, Qatar, on 1 August 2013. The newspaper had 24 pages made of paper pasted on stiff cardboard. It was created over a period of two weeks by 8 individuals.

On 15 October 2022 Qatar was awarded another Guinness World Records certificate after forming the word “QATAR” from 14,183 recycled plastic water bottles to set a new world record, breaking the previous 5,387 record set in 2021.

The event was organized by the Seashore Recycling and Sustainability Center, a division of Seashore Group, as part of Qatar 2022 Sustainability Week. It was attended by several officials and members of the public.

The previous record was held by the Al-Ettifaq Club of Saudi Arabia, which they set on June 7, 2021, after creating the word “Salam” in Arabic from plastic water bottles.

Most push ups (using back of hands) in one minute

The record for most push-ups (using back of hands) in 1 minute is 132 and was achieved by Abdul Latif Mahmoud Saadiq (Qatar) in Doha, Qatar, on 20 November 2009. In his first attempt, Saadiq failed to go beyond 118 attempts but egged on by his coach Salim Lazuruq, the athlete returned and created the new mark.

The Paul Cézanne painting The Card Players was sold to the royal family of Qatar, for $250 million (£158,339,000), in 2011. This painting if one of five in a series by famed French post-Impressionist, Paul Cézanne painted in the early 1890s. The other four are in the collections of the Metropolitan Museum of Art, the Musée d’Orsay, the Courtauld, and the Barnes Foundation.

Asphalt Concrete Road With No Joint

Asphalt concrete is a type of pavement that is made without joints. This makes it possible to have a continuous pavement that can pave an area of square meters. Qatar has set yet another Guinness World Record by paving 42km in 242 hours non-stop, which is equivalent to 10 days.

Hope you enjoyed reading this article on Guinness world records by Qatar. Which one impressed you the most. Let us know in the comments.

What is Qatar well known for? What makes...