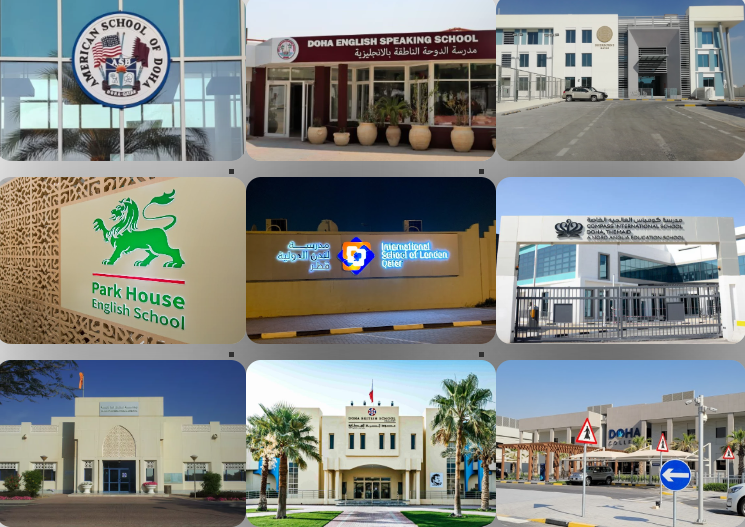 Doha is the central hub for just about everything in Qatar, most of Qatar’s population lives in Doha, and 75% of the city’s inhabitants are ex-pats.

The surrounding areas and cities near Doha are still in the developing stage. So all the international schools are located in the capital city of Doha.

Some schools offer the International Baccalaureate and British and American curricula. Most of the international schools have more than 1000 pupils, but class sizes are mostly small with 20-30 students per class since there are a lot of sections.

With our list best schools in Qatar, you can find a school that can fit your child’s hobbies and interests.

Regarded as one of the world’s leading non profit international schools, The American School of Doha was founded in 1988 by prominent members of the Qatari community and the US embassy to meet the increasing needs of American pupils in Qatar.

The school’s student body is around 2200, and the environment is diverse since there are students from over 80 countries. The campus has a lot of facilities from WiFi to ceiling-mounted LCD projectors in each classroom. There are a lot of options for extracurricular activities such as climbing, basketball, tennis, softball, a fine arts club, and much more.

The students in the school follow the British curriculum and they have tons of sporting, musical and cultural events.

Sherborne Qatar is a joint venture between the Qatari royal family and Sherborne school in England. It was initiated back in 2009. The school is based closely on the British curriculum with all classes taught in English except for modern foreign languages. Around 35% of the pupils are British and the rest 65% of pupils are from over 60 nationalities. This makes it a multicultural community. There are a wide range of after school activities for students, such as thinking skills, modern dance, French and choir, etc.

Park House English School is a part of the International Schools partnership since 2015. The school boasts pupils from over 70 different countries and has remarkable A level results with almost 25% of students achieving A*-A levels. The school offers a UK curriculum (IGCSE) for children of ages 3 to 12.

The aim of the school is to build a better world through remarkable learning. The school also lays emphasis on co-curricular and extra-curricular activities and provides opportunities to students to pursue them.

International School of London was opened in 2009 and is an International Baccalaureate school. The subjects are taught in English but it also provides mother-tongue instruction for all languages. The school lays emphasis on multiculturalism and has a transition program to help families relocating from foreign nations settle in Qatar. The school offers IT suites, science laboratories, art rooms, a food technology room, air-conditioned building with huge classrooms, a gymnasium, an auditorium and an assembly hall.

Founded in 1996, Bright Future International School ranks as one of the best Pakistani schools in Doha. The school offers education for children of ages 3-12 and is affiliated with Federal Board of Intermediate and Secondary Education, Islamabad. It is one of the very few schools in Doha which offers AS-levels and A-Level classes. Bright Future International School Doha is also a recognised study and exam centre of Edexcel, London Board, UK. BFIS is the only Asian school in Doha to offer IGCSE to the resident students of Doha.

Regarded as one of Qatar’s leading schools, compass International School Doha provides the very best in British and international curriculum. The aim of the school is to provide a nurturing environment so that children are able to reach their full potential.

Compass International School Doha is a member of the Nord Anglia group of schools and has access to a range of resources, such as collaborations with world-famous institutes like the Massachusetts Institute of Technology, UNICEF, and Juilliard School.

Formerly known as Doha Montessori and British School, the school was rebranded as Doha British School in the year 2011. There are 3 campuses of the school in Qatar. The first and the major one is in the Ain Khaled Area, the second one in Al Wakrah and the third one is at Rowdat Al Hamama.

Al Khor International School was opened in 1999 and follows the British Curriculum. The school also offers Islamic studies and students whose mother tongue is Arabic are required to study Arabic as a first language. Students who don’t speak Arabic do have the option to study it as a second language. Qatar history is taught in the school for students under the age of fifteen.

Doha College is an International School sponsored by the British embassy and offers a curriculum based on the National Curriculum of England. It has a slight majority of British students and is one of the oldest schools in Qatar to have a British curriculum. The majority of teaching staff are UK trained and the curriculum taught in the school leads to IGCSE qualification and AS and A level qualifications.

Hope you enjoyed the article on best schools in Qatar. What are your thoughts on this? Let us know in the comments.

What is Qatar well known for? What makes... Hurry up and avail the discount now