Qatar Climate – Average Temperature in Qatar – is it hot in Qatar? 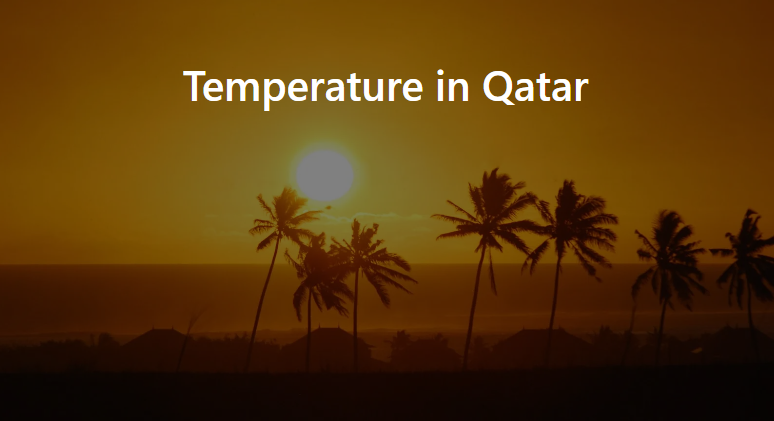 Qatar is a country located in the Middle East, on the Arabian Peninsula. The climate in Qatar is generally hot and dry as you as would be anticipated in a desert climate, with high temperatures throughout the year.

Temperature in Qatar in Summer

In the summer months, temperatures in Qatar can reach up to 50°C (122°F) or higher, with high humidity.

Highest Temperature in Qatar in summer

The highest temperature in Qatar during the summer months can be unbearably hot. The average high is usually around 48°C (118°F) with a low of around 33°C (91°F). This extreme heat can last for weeks, making it unbearable for those not used to such temperatures. During the hottest days, temperatures can soar as high as 52°C (125°F).

The humidity in Qatar also makes it feel much hotter than the actual temperature. To combat this, people wear light and breathable clothing and stay in air-conditioned spaces when possible. Additionally, drinking plenty of fluids is important to maintain hydration while out in the sun. Despite being incredibly hot, Qatar remains a popular travel destination throughout the summer months due to its unique culture and attractions.

Temperature in Qatar in Winter

In the winter, temperatures are generally milder, with average daily highs ranging from 25-30°C (77-86°F). However, nighttime temperatures can drop to cooler levels, sometimes below 20°C (68°F). The humidity is also lower during this time of the year.

Qatar experiences low levels of precipitation, with an annual average of less than 100mm (4 inches). Most of the rainfall occurs in the winter months, although thunderstorms can occur at any time of year.

The best time to visit Qatar is between October and April as this is the period when temperatures are most comfortable and cool. During these months, temperatures range from an average high of 25°C to a low of 15 degree Celsius, making outdoor activities like sightseeing and exploring the culture much easier.

The spring season brings with it cooler temperatures and fewer crowds, providing an ideal atmosphere for exploring the country’s many cultural attractions.

For those looking for something more adventurous, summertime in Qatar offers hot temperatures and plenty of beaches to explore. Whatever time you choose to visit Qatar, you’re sure to have a wonderful experience!

What are the Best 5 star hotels in...

Get the celebrity treatment with world-class service at...