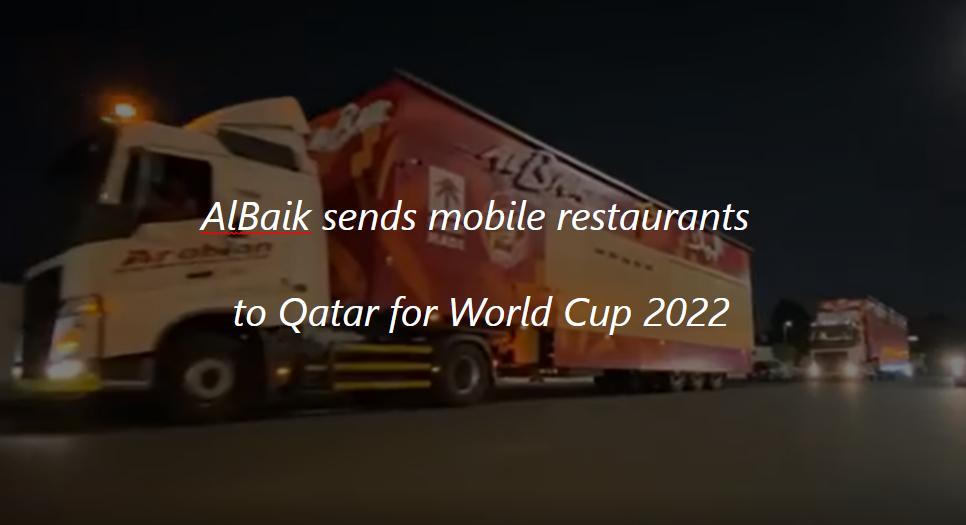 Albaik is a Saudi fast food restaurant chain headquartered in Jeddah, Hejaz that primarily sells broasted and fried chicken with a variety of sauces. It is Saudi Arabia’s largest restaurant chain. Albaik currently has trade name in 80 countries. (Wikipedia)

On 25th October 2022, AlBaik made all the Qatari residents excited by sharing the video of AlBaik mobile restaurants being sent to Qatar for serving people during FIFA World Cup which will be held from 20 November to 18 December 2022.

See below official tweet from AlBaik which states that the first 2, out of 5, Al Baik restaurant trucks are on their way to Qatar to participate in serving food during the World Cup 2022.

Here is the video in case if it is not playing above.

This is indeed and exciting news for everyone and unlike last time, this time its coming from an official source.

Update: The two mobile restaurants which arrived in Doha and were parked outside Hyatt Plaza Gate no. 6 have been moved from there and will be parked now in Fan Village Carvan City – Al Messila.

Here is the map location: https://goo.gl/maps/r27Gn7dFLjcvBAwF6

One more mobile restaurant is parked outside Lagoona Mall.

Are you excited and ready to stand in long queues to get the delicious food from this famous restaurant? Let us know in the comments.

Why Al Baik is so famous?

Their crispy salty chicken together with fries along with unique garlic sauce is what makes Al Baik so special and famous as compared to other broasted chicken restaurants. In Saudia, people have to make lines outside the restaurant, as it tends to sell out quickly. So, the adrenalin rush to fight crowd and get the meal makes it more tempting

What should I order in Al Baik?

Our recommendation is Al Baik chicken meal. However, you can find their other menu items here:
https://www.albaik.com/en/section/our-menu

Join the masterclass on ways of finding a...