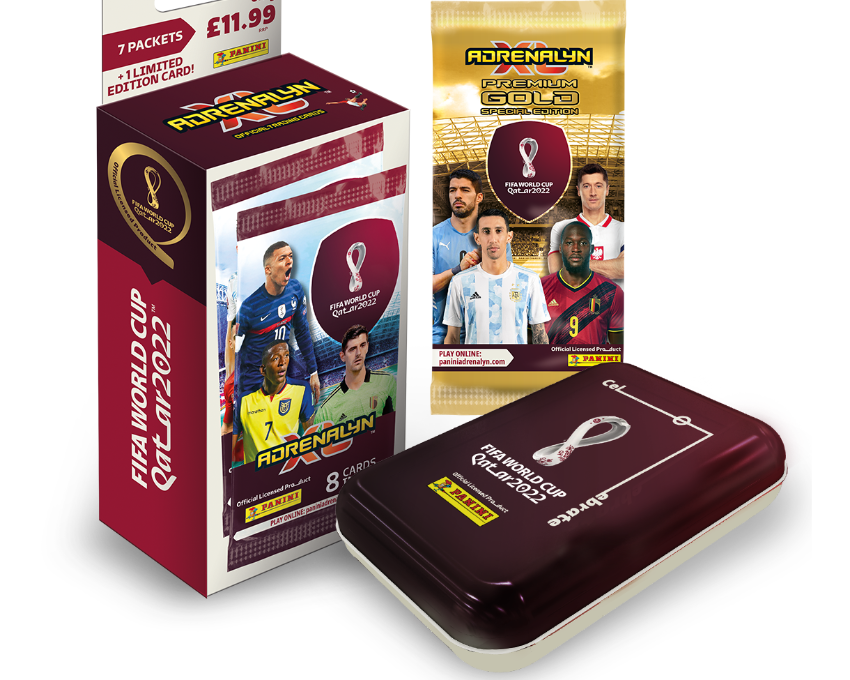 Panini is one of the most famous sticker collection brands in Italy. Their products are sold all around the world, including the United States. One of the most anticipated events in the football world cup is the release of the Panini world cup edition album.

For many football enthusiasts, collecting Panini World Cup stickers is the most important thing during most famous football event. Sticker collectors buy and open pack after pack as they go in search to complete the album.

The 2022 Qatar World Cup Panini sticker album has been released on August 24th in the U.S.A. and Europe and to rest of the world.

This is the thirteenth edition of the Panini sticker Album. Inside, you will have the usual special cards, such as the Qatar world cup stadiums, the trophy and the logos introducing to #Qatar2022.

The sticker album and sticker packs can be purchased in supermarkets and shops across the country. You may buy it online too through Amazon, Panini official store and other online shopping sites.

Qatari residents are able to buy online or in stores from Almeera https://almeera.online/

How much is the price?

As per the sales on official Panini website for the Qatar World Cup 2022 sticker collection, the prices are slightly higher than the previous editions:

Panini FIFA 365 sticker album is available in Qatar in Almeera at the following prices:

Panini is the International brand leader within the world of sticker and trading card collectables with over 1.000 collection launches each year and one of the leading publishers of children magazines and books, comics, manga and graphic novels, in Europe and Latin America with over 7.000 publications yearly. Panini employs a staff of over 1.200. 150 territories are regularly actively engaged with Panini’s physical products throughout every part of the World.

Panini is synonymous worldwide with stickers and albums. Historically the company has grown thanks to collectable items, and it remains one of the most important areas of business for the Group. Stickers are collectable images printed on adhesive paper so that it is easy to stick them in the related album. They are sold in packs that usually contain 5 to 6 stickers and generally available in the newstrade, confectionary shops and in key retail chains worldwide.

Born as cigarette cards in the U.S.A, they are stiff, non-adhesive and double-sided, with images and text on both sides – front and back. In some cases, cards can include memorabilia and autographs to enrich their collectable value. They are sold in packs usually containing from 6 to 10 cards. The cards can be collected as they are or placed in special binders with a transparent pocket for each card. Cards are available in the newstrade, hobby shops, confectionary and key retail chains worldwide.

Trading Card Games are made of trading cards with an attacking, defensive, and overall rating so collectors can play the game sometimes using an associated game board. In some releases, the unique authorisation code on the back of each card allows users to upload their cards online to a virtual collector’s album and play the game on line against the computer or against other players.

Cards printed on special paper similar to photographs. They are sold in envelopes which usually contain from 6 to 8 items.

Gadget Packs contain collectables such as small action figures or three-dimensional models in plastic or metal, some of which can be used in a variety of games.

The Panini virtual Sticker Album is a web and mobile application designed to enhance your experience of 2022 FIFA World Cup Qatar™. Based on the classic sticker-collecting game that’s entertained generations of football fans for decades, Panini Sticker Album is available as an app on Google Play and the Apple AppStore.

For web based app, visit: paninistickeralbum.fifa.com

You don’t need to sign up or register to start your Panini 2022 FIFA World Cup Qatar™ Official Sticker Collection. You can try it out as a guest and get collecting straight away! If you’d like to keep collecting on a second device, and if you’d like to access all the features of the game, you’ll need to create a FIFA account via the app. The goal is always the same: swap your stickers with your friends to complete your virtual sticker album!

Every day, you’ll get two free packs to add to your collection. If you’re playing as a guest, you’ll get one. To get extra packs of stickers, you can use the app to enter certain promotional codes that you’ll find on the back of real-life Panini stickers, on FIFA’s social media channels and under the cap of certain Coca-Cola products in certain countries. You’ll be able to scan special 2022 FIFA World Cup Qatar™ products from The Coca-Cola Company or Panini to get one new pack of stickers every day.

Getting the Team Believers

In selected countries, you can unlock the digital Team Believers stickers by scanning the stickers placed under the label of certain Coca-Cola products. You find the option in the ‘Scan content’ screen if it is available for your country. In some countries, you can receive these stickers when entering codes printed under the cap of certain Coca-Cola products. Visit the ‘Promo code’ section for this. If the digital Team Believers are available for your country, you might also get them when opening digital packs. Note: The Team Believers stickers cannot be swapped.

To open a pack in the app simply tap ‘Open packs’ in your home screen. This will move your newly-opened stickers into your ‘New stickers’ stack. From there, you can drag your new stickers into your virtual album, or drag them to your swap stack to offer them up in exchange for the stickers you want.

Managing your sticker stacks (My stickers)

Managing your online album (My album)

You can glue any stickers you want to keep into your album. Any stickers you don’t already have in your album have a turquoise star next to them. To glue a sticker in, you can open your album and go through page by page, or jump to pages where your new stickers belong by using the ‘Select page’ button. You’ll see where to glue your new stickers because there will be a clickable ‘+’ sign in the respective pages of your album. Tap the ‘+’ to glue in your sticker and boost your collection! Once a sticker is glued into your album, it can’t be removed.

Just like with physical stickers, swaps are an important part of growing your virtual Panini Sticker Album. You can manage all your swaps and swap requests in the Swap Area. You’ll find it at the bottom of your home screen. Here, if you’re logged in you can create up to three swap requests by tapping on the ‘+’. If you’re playing as a guest, you can make one swap request. When you create a swap request, you can choose who you’d like to swap your stickers with. You can open the swap request to all other players of the game, or keep things private by swapping within your collectors team (more info below).

Once you’ve chosen who you’d like to swap with, you can select the stickers you’d like to offer up in the swap, including picking single stickers, a whole team’s stickers and even your entire sticker stack. Then you can set which stickers your want, whether that’s an individual sticker or a whole team. Once you save your swap request, we’ll try to match your request with other players from around the world. Once created, you can edit your swap request in the Swap Area.

When swapping with other users you get a special Fan Sticker for the first sticker from any team you received through a swap. These Fan Stickers cannot be swapped themselves.

Once you create a swap request, we’ll try to match your request to another person’s request. If we find a match, you’ll both get a notification on your home screen. You can only ever get the same number of stickers as you’re swapping out.

Swapping within a team (My team)

Alongside your public swap requests, you can exchange stickers within a group of friends, called a Collectors Team. Create a team for up to eleven players by selecting ‘My team’ in the main menu. If your friend has already set up a Collectors Team, you can join it by entering the team ID and password. Once your team is created, you can create swap requests within your own team.

The stickers in your virtual collection can also be used in challenges. Challenges include collecting specific stickers or entire groups, as well as entering promo codes or scanning promotional products. To participate in a challenge, go to ‘Challenges’ from your home screen. Each challenge has a deadline, an objective and a reward. When you get a sticker that helps you complete a challenge, you can stick it into your album as normal. These stickers will have a tick (‘✓’) button on them. You’ll need to tap the button to count that sticker towards the challenge. If you manage to complete the challenge before the deadline, you’ll get a reward!

If you do well as a collector, you’ll be rewarded with achievements. These are extra packs or stickers that you earn by reaching certain milestones. Your achievement will appear as badges in the ‘Achievements’ section of your virtual album.

6 best Arabic perfumes in Qatar for your...

Deals and discounts on your favorite brands in...

Recruitment agencies in Qatar for better and faster...

hello , i really liked your article , i just have one simple qustion , can u you pleas tell me can i pay by paypal in amazon website ?, thanks again for this detailed article

Hi Lupe, unfortunately there is no option to pay through PayPal on Amazon.

However, there are multiple other payment options. See below image. 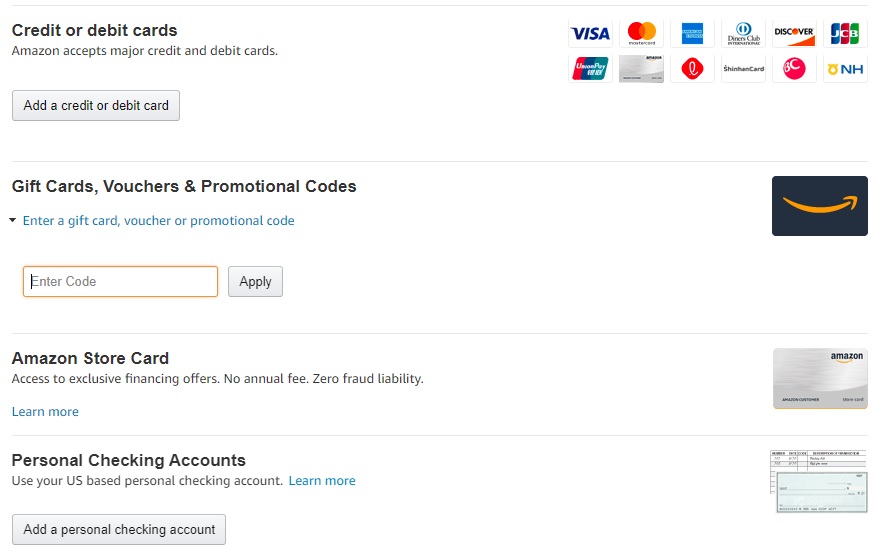 Although Amazon doesn’t let you pay with PayPal, it does let you choose the credit or debit card you want to use during the checkout process. If you use a PayPal Cash Card, PayPal Business Debit Mastercard or PayPal’s new virtual card, PayPal Key, you can pay for your Amazon purchases with your PayPal account.